Social media is now the preferred source of getting news. However, we’re left questioning: what’s real vs fake? ...

The time of getting news primarily from TV, radio, and printed newspaper is no more.[1] Social media has officially surpassed traditional media as a preferred news source for people worldwide. Power and influence has shifted; mainstream media has lost control over content and publication of information and ordinary people have become opinion leaders with accessibility to international platforms to vocalize and share opinions. [2] Where people formerly used to actively seek out or tune in for a nightly televised news broadcast, has now shifted to a culture of online sharing, liking, and commenting. As convenient as it has become to get news updates with a simple scroll through our Facebook newsfeed, a sinister side of social media has been revealed and we’re left questioning: what’s real and what’s fake? 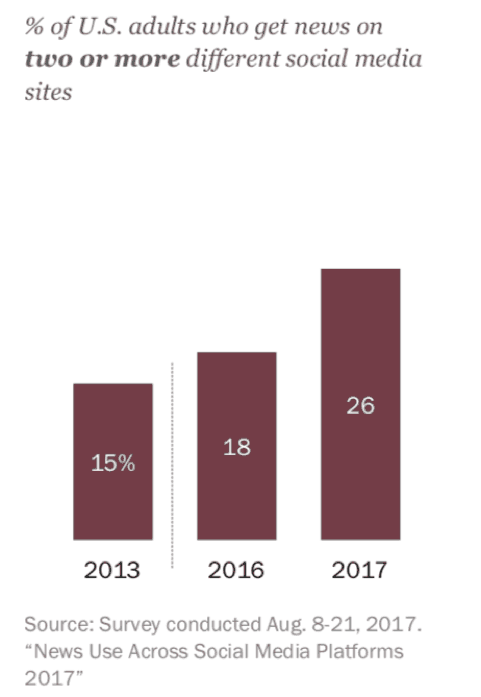 While these statistics may seem small at face value, they are in fact overwhelming when placed in greater context. As of August 2017, an astounding 40% of the global population, 3.028 billion people to be exact, are active social media users.[4] To name a few most frequented:

Case in point: Facebook. Not only does Facebook have the most registered users in comparison to all other social media platforms,4 it also surpasses all others as a preferred news source.3 66% of the total United States population uses Facebook, of which 45% get news from the site. With a U.S. population of approximately 326.3 million people,[5] 215 million are Facebook users, of which 97 million actively get their news from Facebook. That’s big news. 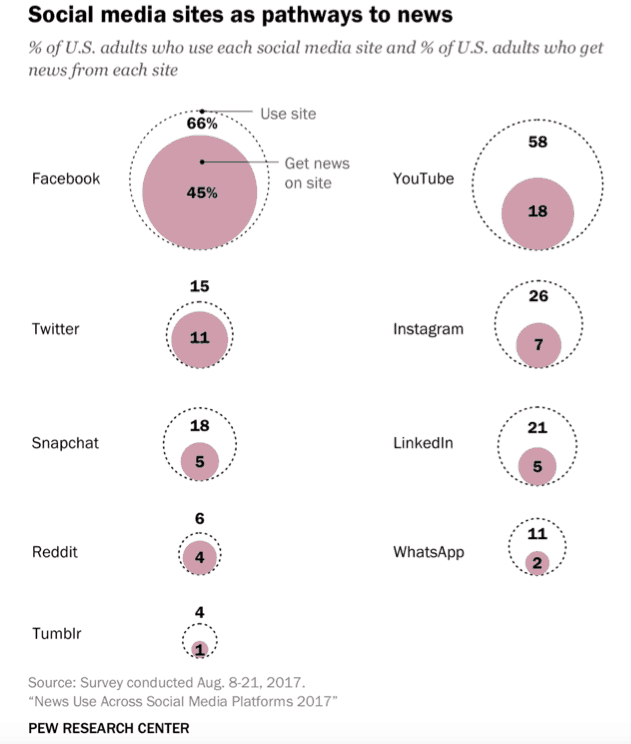 With such a large audience, now more than ever, it’s critical information being communicated is truthful, factual, unbiased, and validated by reputable sources. Unfortunately, this is far from the truth. With the rising trend of people consuming news through social media, comes the alarming rise of misinformation diluting and tainting online sources. In short, ‘fake news’ has very much become real news.

Fake news in itself is not new news. Whether through speech or written word, rumors and false stories have circulated for as long as mankind has existed.[6] Nevertheless, the intent behind fake news has remained the same. It’s what I refer to as the 3 M’s. Fake news is written to intentionally:[7]

While the exact motivation behind fake news is subjective to the article author and content, there appears to be two classifications: monetary and ideological motivation.[8] Monetary motivation occurs when viral news articles financially profit from advertising revenue by having online users ‘click’ on the original website. For example, Jestin Coler, owner of a few fake news sites from California, reportedly made between $10,000 and $30,000 a month from advertisements.[9] He’s responsible for the infamous “FBI agent suspected in Hillary [Clinton] email leaks found dead in apartment murder-suicide” article which garnered 1.6 million views in the first 10 days published online. Whereas ideological motivation occurs when fake news is published to advance a political agenda, such as publishing fake positive content in favor of a candidate or fake negative content against an opponent.8 Menczer, of Indiana University Bloomington, argues that generating online buzz about a candidate or political agenda provides legitimacy to the message, regardless whether it’s real or fake.[10] Posts or tweets (especially by ‘verified,’ influential people) may post in search engine results, further suggesting the content is part of a widespread discussion.

In comparison to traditional media streams, social media is low cost, time efficient, easily accessible by an international audience and rapidly distributes information.7 However, these seemingly advantageous benefits are also the downfall of real news because these same online platforms have catalyzed the speed and reach of misinformation. According to Dartmouth College political scientist Brendan Nyhan, “‘social media are a very effective and efficient way to spread false beliefs’” and unfortunately it’s been shown that corrections to misinformation fail as they don’t travel as fast as the original fake claim.10

These headlines reveal a much more sinister side of social media’s influence over news reporting. Social media has strongly contributed to the breakdown of the authenticity equilibrium of what is real and what is fake.7 Even former U.S. President Barack Obama said in an interview with The New Yorker that “the new media ecosystem,

‘means everything is true and nothing is true. An explanation of climate change from a Nobel Prize-winning physicist looks exactly the same on your Facebook page as the denial of climate change by somebody on the Koch brothers’ payroll. And the capacity to disseminate misinformation, wild conspiracy theories, to paint the opposition in wildly negative light without any rebuttal – that has accelerated in ways that much more sharply polarize the electorate and make it very difficult to have a common conversation.’”[14]

Until social media platforms implement a flawless system of checks and balances to filter what is real versus fake news, the responsibility falls on our shoulders. As online citizens, it’s become our responsibility to critique what we read, read beyond the headline, seek out the truth, and validate sources. Because in the end, fake news is just that. Fake.