WHEN CONSUMERS FIGHT BACK: HOW TO DEAL WITH NEGATIVE ELECTRONIC WORD-OF-MOUTH – THE CASE OF UNITED AIRLINES

Looking upon the flood of different articles and journals about electronic word-of-mouth you might wonder, what is the fuss all about? The answer lies with the imposing speed and volume of the diffusion of negative electronic word-of-mouth through social media. This makes it possible to overrun companies in no time and has drawn much attention to literature and media.

However, even though electronic word-of-mouth is very powerful, many executives are still reluctant to invest the time and effort required for a successful social media strategy (Kietzmann, Hermkens, McCarthy, & Silvestre, 2011). This blog deals with the emergence of the empowered consumer, which leads to the importance of knowing how to handle negative electronic word-of-mouth.

FROM PASSIVE TO ACTIVE – THE RISE OF THE EMPOWERED CONSUMER

Consumers no longer merely play the role of the passive participants in the marketing exchange process, as they did in the ancient times of Web 1.0 (Hanna, Rohm, & Crittenden, 2011). Whereas most of what existed in Web 1.0 was company-generated, the recent development of Web 2.0 technologies allows users to produce content collaboratively (Ritzer & Jurgenson, 2010). Hence, instead of taking on the content companies provide, consumers are increasingly using social media platforms such as Facebook, Twitter or YouTube to create, share and discuss content (Kietzmann et al., 2011).

But what are the consequences of this development for companies or the responsible marketer?

Web 2.0 technologies allow two-way interactions between customer and company, along with the rare opportunity to listen and respond to consumers (Fournier & Avery, 2011). However, as the introductory quote of the founder and CEO of Amazon.com implies, also unhappy customers can take part and can reach now a significantly bigger audience on the internet, than it would be possible in the physical world. Consumers are now able to get the information they need from one another, rather than merely relying on information provided by companies. The information asymmetry between corporations and consumers, which before worked on behalf of the firms, is now suddenly reversed (Christodoulides, 2009). Hence, the power has been taken from those in marketing by consumers who create and share blogs, tweets and videos. That has given rise to the empowered consumer of Web 2.0 (Kietzmann et al., 2011). It is now up to the company to decide whether to get ‘serious’ in Web 2.0 and participate in the communication or continue to ignore it.

Even though word-of-mouth (WOM) is now mostly associated with social media, it already existed before the advent of Web 2.0. Traditional WOM refers to consumers sharing information between a comparable small group of individuals (Hennig-Thurau, Gwinner, Walsh, & Gremler, 2004). But now with more than two billion active Facebook users alone, WOM interacts on a whole new level (Facebook, 2017). Electronic word-of-mouth (eWOM) therefore refers to any positive or negative statement made by customers about a product or a company, which is made accessible to millions of consumers via the Internet (Hennig-Thurau et al., 2004).

What once used to be the communication between the customer and the company – as for instance, a complaint – can now reach millions of other consumers in no time (Xia, 2013). eWOM causes new challenges for organizations, since it is difficult to control its creation and spread. But even more, the power of eWOM strengthens when consumers share negative feelings and thoughts on social media (Kim, Wang, Maslowska, & Malthouse, 2016). Research showed that the eWOM effect is greater for negative eWOM than for positive, since negative information is perceived as more interesting and attention grabbing, than positive information  (Park & Lee, 2009). Companies must be aware, since it has been shown that negative eWOM decreases sales more than positive eWOM increases it (Kim et al., 2016).

CASE OF UNITED AIRLINES – WHAT HAPPENDED?

One organization which encountered a textbook example of negative eWOM represents the airline carrier United Airlines. It started with the musician Dave Carroll, who saw how the airline´s baggage packers threw his beloved guitar on the runway and afterwards found it broken (Rauschnabel, Kammerlander, & Ivens, 2016). After one year of negotiations with United Airlines, Carroll ultimately received the reply that they would not take any responsibility. Angry and frustrated, the musician decided to create a music video called United Breaks Guitars on YouTube, about his negative experience with United Airlines (Figure 1). The song received 17 million views, went viral through various social media platforms and motivated other users to share their negative experiences with United. The United Airline stock was significantly affected the following week. 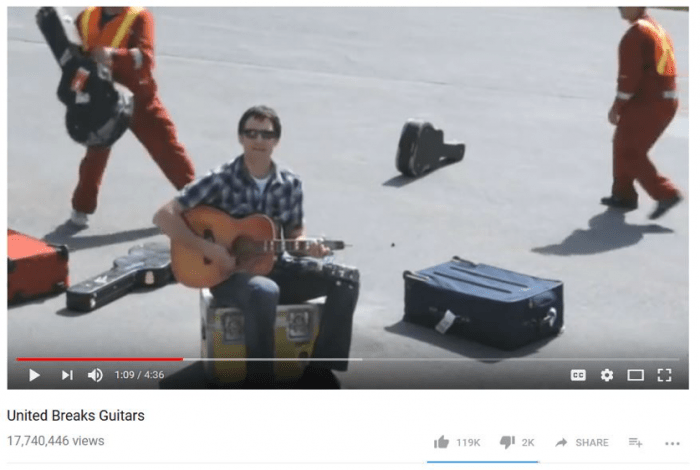 But how did United Airlines respond to this public confrontation? United discovered the music video one day after it was published via a Twitter post (Deighton & Kornfeld, 2010). The airline decided to react with a statement on Twitter in the late afternoon, telling the Twitter user who initially made United Airlines aware of Carroll’s public approach that ‘the word you hear is wrong […]’ (Figure 2). 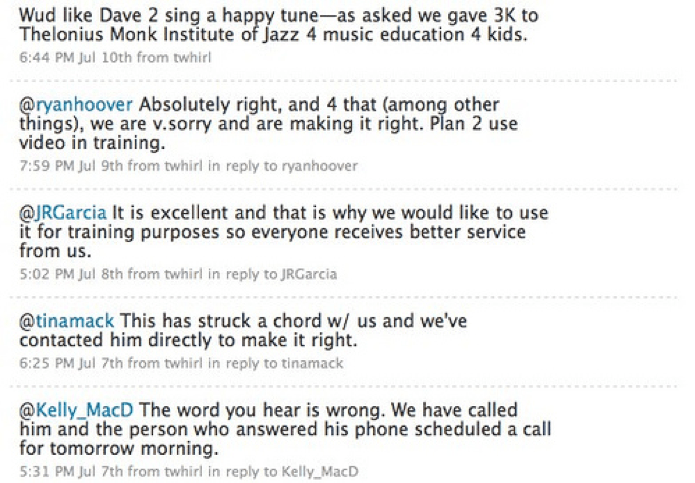 This first reaction was rather hasty and defensive and the music video continued to spread throughout the social media sphere (Rauschnabel et al., 2016). But United seemingly changed their initial approach and afterwards tried to demonstrate empathy by communicating that the video is planned to be used for training purposes to improve their service. United also posted to donate the money to charity, since Carroll denied the reimbursement.

This incident went so viral that consumer today, after eight years, still refer to #unitedbreaksguitars to express negative experiences with airlines on Twitter (Figure 3). 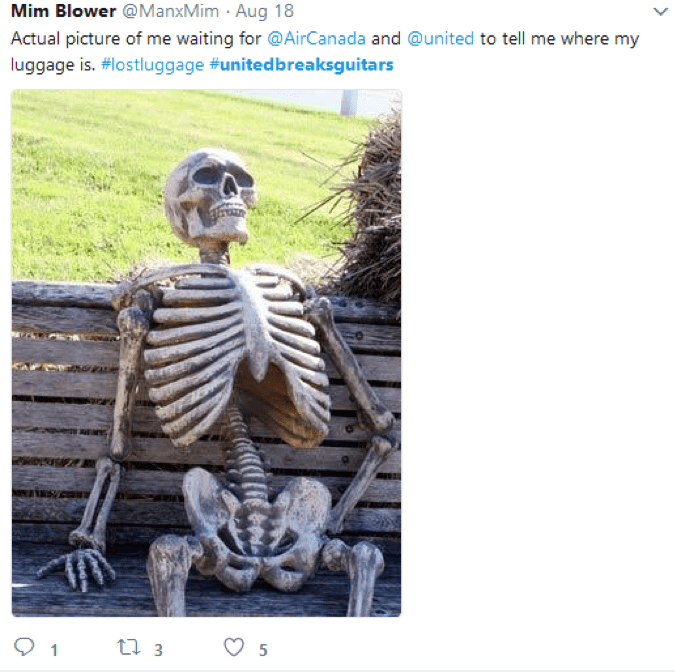 HOW TO HANDLE NEGATIVE EWOM – WHAT WE HAVE LEARNED

So, what can we learn and ideally do better looking upon ‘United Breaks Guitars’?

Even though companies might fear to become the target of negative eWOM, Pfeffer, Zorbach, & Carley (2013) recommend to rather increase instead of decrease the social media activities. A company that is well established and connected in the social media sphere is far more crisis-proof. They can use social media platforms to proactively build relationships with loyal customers and fans (Pfeffer et al., 2013). This is advisable since consumers who have strong relationship with a company are more likely to recommend and defend the organization, which can be beneficial when negative eWOM spreads (Xia, 2013). Unfortunately, United was solely active on Twitter when the music video went viral (Rauschnabel et al., 2016). Increasing their activity on other social media platforms might have helped United in building a stronger relationship with their customers and could have calmed down the uproar faster.

Another critical aspect on how to handle negative eWOM refers to the speed of reaction. The case of United Airlines is a good example to demonstrate that timing matters. Only within a few hours can negative eWOM spread through various social media platforms. Since social media users expect instant replies to their concerns, companies only have a short timeframe to react (Rauschnabel et al., 2016). Studies have shown that the effect of negative eWOM strengthens when the company do not react in the early stages (Rauschnabel et al., 2016). It took United Airlines more than a day to realize what happened and to respond to it. That might have led to an even stronger negative outcome, which brings us to the next point of recommendation.

Finally, it is not just about being active. Rather, customers want firms to engage appropriately, listen and respond (Kietzmann et al., 2011). An open and vulnerable respond to criticism demonstrates sincerity and respect for the customers. A defensive strategy such as denial, on the other hand, makes customers more likely to feel that the company is responsible for the negative event (Xia, 2013). Studies have shown that denying mistakes or simply ignoring criticism will further increase negative emotions and anger, which could generate even more negative eWOM (Chang, Tsai, Wong, Wang, & Cho, 2015). Therefore, the key is to recruit employees who have the ability to listen and to show empathy to create the right responds for the upset customer (Kietzmann et al., 2011). Hence, instead of addressing the criticism by defending themselves, stating ‘The word you hear is wrong’ (Figure 3), United should have started off with an open and honest approach, to not further reinforce anger. Admittedly, better late than never, United changed their approach after their first Twitter-Post to a more sincere and open way of communication (Figure 2). Unfortunately, this happened days after the music video already went viral and the damage has been done.

Consumer today are more empowered than ever before, as United Breaks Guitars well demonstrates. Marketers in charge must equip themselves with the right strategies to be able to counteract negative eWOM. This blog provides an understanding of the empowered consumer and four tips on how to tackle negative eWOM. Now it is up to you! Are you ready to get ‘serious’ in social media?

Leboff, G. How the internet has revoluntionised word of mouth. [online] Available at: https://www.marketingdonut.co.uk/blog/14/03/how-internet-has-revolutionised-word-of-mouth [Accessed 11-05-2017]