Why Nike’s anniversary campaign with Colin Kaepernick stepped up the game of brand activism and social media...

Nike has done it again – risking it all

On September 3rd, the Instagram Post  of kaepernick7 created a hype on social media and divided the masses. Colin Kaepernick, a 31-year-old American football quarterback, shared a black and white portray with the caption ‘Believe in something, even if it means sacrificing everything. #JustDoIt‘. In doing so, he announced his collaboration with Nike for their 30th year anniversary campaign of the probably most famous brand slogan – Just Do It. But this is only the tip of the iceberg.

In 2016, Kaepernick became famous for kneeling down during the national anthem instead of standing (Pearl, 2018). Honoring the flag and anthem is very important for America’s culture, so of course, media was quickly drawn to him. Football fans were offended, and patriots claimed that he would not honor the United States (Pearl, 2018). Consequently, the NFL asked him to justify his behavior. Here is his answer:

‘I am not going to stand up to show pride in a flag for a country that oppresses black people and people of color. To me, this is bigger than football and it would be selfish on my part to look the other way. ‘ (Wyche, 2016)

For a few years already, the U.S. faces huge problems with police brutality and racial injustice. Kaepernick addresses these issues by kneeling and people hated or loved him for it. Many other athletes joined him in his protest and Kaepernick had to live with the consequences. In 2017, he became a free agent and did not play for a year (Pearl, 2018). But no matter on which side you stand, Nike choosing him as a sponsor for their anniversary campaign was a controversial move that heated up the debate. Since Nike was losing market share against their competitors, the sports brand had to do something crazy. This ad is going further than only promoting Nike’s products and clearly positioned the brand in a political and social manner. Nike is known for choosing risky ads in the past, but Pearl (2018) claimed this to be the biggest ad of the last 30 years. And here is why.

It is all about the profit, right? Well, if you believe this, you need to improve your market research. If you target Millennials, making a profit out of a superior positioning in the market is not enough anymore. Millennials, the largest demographic group, are looking for more – a purpose, which increases their trust in the brand (Kotler & Sarkar, 2018). Consumers identify themselves with a brand and express their personal values also by purchasing certain items. Therefore, CSR becomes more and more important and can ‘strengthen emotional bonds and advocacy for the company‘ (Uzunoğlu, Türkel and Yaman Akyar, 2017). And isn’t this what every company wants?

With their Kaepernick campaign, Nike also stepped up the game of brand activism, a term introduced by the marketing guru Philip Kotler. Specifically, ‘brand activism emerges as a values-driven agenda for companies that care about the future of society and the planet’s health‘ (Kotler & Sarkar, 2017).

Inevitable, the political polarization in the U.S. influenced Nike to choose a side and sacrifice a segment of their customer base. By clearly raising a voice for the #BlackLivesMatter movement and against Trump’s ambitions, they showed that their customers should represent important social values – Nike’s values (Pearl, 2018). Authenticity and Self-Identification were important drivers in this campaign, so that consumers see Nike and their sponsors as role models for the greater good. Luckily, and well-calculated from the company, this campaign was praised by the young and urban Millennial generation. Nike cared more about the long-term effects of this campaign than on the possible short-term backlash. They are a global voice in the sports industry and have the power to influence a culture, whereas many other companies are still trying to somehow combine different segments and target everyone (Pearl, 2018).

But actions speak louder than words, so here are the hard facts. Nike’s online sales increased by 31% in a four-days period after the ad (Philip & Sarkar, 2018). Physical stores reported an even higher number – a 61% increase in merch sales in a period of 10 days after the ad was played compared to 10 days before (Panepinto, 2018). Consumers nowadays prefer polarizing products in order to show who they are and who they are not (Rozenkrants et al., 2017). So, Nike couldn’t care more about the so-called mid-50 white Republicans, who turned against the “unpatriotic” brand and demanded product boycotts (Shah, 2018).

Love vs. Hate on Social Media

Due to its never-ending ties and connections, social media is a network with infinite possibilities which can reach and impact everyone (van Dijk, 2012). This means, that there were literally no boundaries for Nike’s Kaepernick campaign to be seen by everyone since they mainly relied on social media as their first communication tool. The topic was filled up with controversy and resulted in massive engagement online and offline. On social media, it is all about ‘facilitating conversations around the brands‘ (Christodoulides, 2009, p. 142). Was this topic relevant and controversial enough to go viral and let everyone talk about Nike? Well, let’s see…

These numbers undoubtedly show that Nike’s Kaepernick campaign captured the attention of customers.  The Google trends popularity index for ‘Nike‘ has always been between 20-30 but from September 3rd to 8th, it reached its maximum of all times (trends.google.com, 2018). The video advertisement called ‘Dream Crazy’ was run by Nike during an important NFL game in prime-time, which supported the online marketing of the company (Kotler & Sarkar, 2018).

Nike’s Kaepernick campaign received millions of responses online, either celebrating or boycotting the company. Some boycotters even burned their Nike shoes… yes.

Nike’s Kaepernick campaign started a social media war between the hashtags #justdoit and #justburnit, #boycottnike or #istandfortheflag. In the end, even Donald trump couldn’t resist but join the debate, with responses such as ‘Nike is getting absolutely killed with anger and boycotts, I wonder if they had any idea that it would be this way? ‘ (Trump, 2018) or ‘Get that son of a bitch off the field’ (Trump, 2018). Also other sport teams reacted to Trump:

“It’s a shame and disgrace when you have the president of the US calling citizens of the country sons of a bitches.” (Graham, 2017)

This shows, how much of an impact Nike’s campaign with Colin Kaepernick had. It affected more than just athletes or fashion enthusiasts, it made its way to the president of the U.S..
A sentiment analysis on the social media reactions proved that negative brand impact came strongly from older generations, but the support generated came from their main and future customer base – Millenials (Shah, 2018). Nike is famous for his strong brand community, which results in higher trust and loyalty to the brand. This community held tightly together and finally won the game (Laroche et al., 2013). The study also emphasized that feelings on social media directly after the ad were more negatively related but after some time, the responses were mainly positively correlated (Shah, 2018). In total, Nike’s Kaepernick campaign had a media exposure of over $43 million and will certainly be remembered as one of the biggest ads in the century (Novy-Williams, 2018).

The End of the Game

All in all, Colin Kaepernick was the right fit at the right time for Nike’s anniversary campaign.  In order to make an impact and stay in consumers mind in the fast-changing environment of social media, marketers must take risks and do something bigger (Christodoulides, 2009). Brand activism becomes more important every day and Nike’s Kaepernick campaign is the perfect example on how to communicate it via social media. They certainly have the first-mover advantage and now, it is up to you to follow. Will you risk and sacrifice something to build on your purpose and be rewarded?

Graham, B. A. (2017). Donald Trump blasts NFL anthem protesters: ‘Get that son of a bitch off the field‘. [online] Theguardian.com Available at https://www.theguardian.com/sport/2017/sep/22/donald-trump-nfl-national-anthem-protests [Accessed 27 Nov. 2018]. 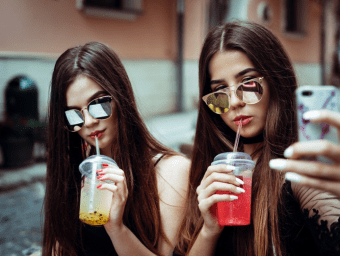 How to Hook Generation Z with Instagram Stories: A hyped story is not good enough